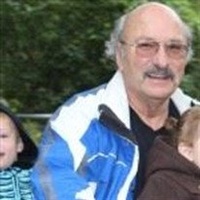 May 31, 2014 Alan Dale Wright, also known as "My Dale" or "Papa Dale", son of Clarence and Patsy Wright, left this earth on May 28, 2014, to move to his heavenly home where he will join family and friends who have gone on before him. Celebration of Life:
Monday, June 2, 2014, 10:00 AM, at Memorial Park Chapel, 5111 S. Memorial Drive, Tulsa, Oklahoma. Dale was born on July 19, 1952 in Tulsa, Oklahoma. He graduated from East Central High School in May 1971. Dale then attended the University of Oklahoma, where he received a BS in Pharmacy, December 1976. His first job was at St. John Medical Center, where he met his beloved wife, Erica Wright. Next Dale worked at Bartlett Memorial in Sapulpa. He served as the Director of Pharmacy. Tulsa Regional Medical Center followed, where he was the assistant Director of Pharmacy. Then Dale moved on to Freeman Hospital in Joplin, Missouri for ten years as the Director of Pharmacy. He also worked at Claremore Regional Medical Center in Claremore, Oklahoma and Mercy in Joplin, Missouri. Dale and Erica just celebrated their 33rd wedding anniversary. Dale was a proud father of a son, Eric Dale, a proud father-in-law to Ashley Michael and an especially proud grandfather of Asher Ezekiel and Eleanor Dahlia. He had a special love for his pets, primarily dogs. Dale was an avid outdoorsman. He loved back packing, hiking, skiing and fly fishing. Spending time with his family and traveling with them was his favorite. Dale especially loved spending time with his grandchildren. He also enjoyed reading about science and medicine. Dale is survived by his wife, Erica Wright of Chelsea;
his son, Eric and wife, Ashley Wright of Joplin, Missouri; his grandchildren, Asher and Eleanor Wright of Joplin; parents, Clarence and Patsy Wright of Tulsa; brother, Dennis and sister-in-law Joan DeCamp of Verdigris; sister, Rebecca and brother-in-law David Myers of Tulsa; and a host of nieces and nephews. Preceded by his brother, Leslie Wayne and sister-in-law Janice DeCamp of Glenpool; and brother, Clarence Leo Wright Jr. of Tulsa. Family viewing will be at Kennedy-Midtown Funeral and Cremation, Sunday, June 1, 2014, 5-8 PM Kennedy-Midtown Funeral and Cremation
8 North Trenton Avenue, Tulsa, Oklahoma
918.599.7799
kennedycares.com http://youtu.be/Y0rnUxzY1FM

To order memorial trees or send flowers to the family in memory of Alan Wright, please visit our flower store.