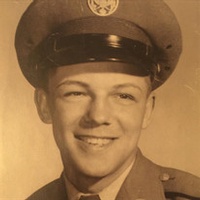 Albert Harry Yeager was born to Albert Frederick Yeager and Ruth Ellen Young on January 23, 1937 in Meadville, Pennsylvania. As a young man Albert joined the United States Air Force. He served in in Great Britain and Germany until he was honorably discharged as Airman Third Class in 1958. In September of 1977 Albert wed Beverly Seymour. Albert spent most of his working life as a truck driver and baker for Wonder Bread. He had a deep passion for cooking and loved to feed those he loved. If you would come over on any given Sunday you would never leave hungry. Many family and friends would joke about how much weight they gained after eating at his house. Albert was also a very charitable man. In his later years he spent time cooking for nursing homes, and they would frequently call requesting him to come back. Albert was also a dedicated Mason. He may have been gruff on the outside, but everyone who knew him well would tell you he was gentle on the inside. He adored his grandchildren and great-grandchildren, and often spoke lovingly of his brothers and his wife Beverly. Albert is preceded in death by his wife: Beverly Seymour and his brothers: William and David Yeager. He is survived by sister: Sandy Yeager his brother James Yeager his daughter: Jenny Cork, his four step-
sons: Steve, Larry, David, and James, fifteen grandchildren, eleven great-grandchildren and several nieces and nephews. Albert passed away on July 10, 2016. He was loved by many and will be missed dearly.

To order memorial trees or send flowers to the family in memory of Albert Yeager, please visit our flower store.