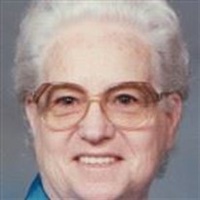 August 13, 2011 Alberta Louise Ward of Catoosa, 82, entered eternal life September 12, 2010 at her home. She was born March 3, 1928 in Roswell, NM to Alexander and May (Russell) Hooser. Louise married Earl Ward June 10, 1944 in Roswell and they moved to Catoosa in 1947. A member of Catoosa Assembly of God, she enjoyed crocheting and reading her Bible and books. Louise was preceded in death by her husband Earl Ward and is survived by her loving daughter Helen Harrell; sons: Lee Roy and Allen Ward; numerous grandchildren and great-grandchildren. Visitation: 10AM-5PM Tuesday, September 14;
service: 10AM Wednesday, September 15 at Catoosa Assembly of God; interment: Dick Duck Cemetery. Kennedy-Kennard Funeral & Cremation, 266.2112.

To order memorial trees or send flowers to the family in memory of Alberta Ward, please visit our flower store.