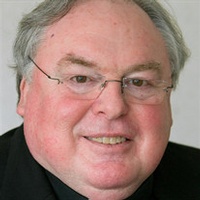 Reverend Alex Kennedy passed away unexpectedly on Friday, Aug. 18, 2017. He was the pastor of St. Elizabeth Catholic Church in Grove, Oklahoma. The Rosary and Visitation for Father Kennedy will be at Holy Family Cathedral, 122 W. 8th St., Tulsa on Friday, Aug. 25 at 7 p.m. The funeral Mass will be at Holy Family Cathedral on Saturday, Aug. 26 at 11 a.m. Father Kennedy was born on Jan. 8, 1947 in Hellifield, England to James and Margaret Elizabeth Kennedy, who preceded him in death. His family moved to Port Huron, Michigan from Scotland when he was six years old. He came to the University of Tulsa to complete undergraduate studies, and then attended the TU School of Law. He worked as a lawyer in the oil-and-gas industry for years and then converted to the Catholic Church in October of 1985. His conversion eventually led him to consider the priesthood. In 1987, responding to God's call, he enrolled at Sacred Heart Seminary in Franklin, Wisconsin, which specializes in second career vocations. He was ordained to the priesthood on June 1, 1990 at the age of 43. After his ordination, he was assigned as associate pastor of Sacred Heart and Assumption Parishes in Muskogee, Oklahoma under the leadership of Father Herman Foken and served as the parishes were combined to form St. Joseph Parish. In 1995, he was appointed pastor of St. Monica and St. Augustine, both in Tulsa. In 1997, he was assigned as pastor of Holy Ghost Church in Vinita, Oklahoma and then St. Elizabeth Church in Grove, where he served until his passing. He also served the Diocese of Tulsa and Eastern Oklahoma in several administrative positions during his ministry. It was his moral theology class in the seminary that piqued his interest in health care and bioethics. For a time, Father Kennedy researched these issues on his own, but he also attended meetings of the National Catholic Bioethics Center in Philadelphia. In the mid-2000s, he began a year-long certification program in bioethics that involved online work, conference calls and seminars and workshops under the guidance of Father Tad Pacholczyk, director of education at the National Catholic Bioethics Center. Father Kennedy took oral exams in Philadelphia and wrote a major paper on "medical futility" and attended a week-long symposium at the Kennedy Center for Bioethics in Washington, D.C. He was a member of the National Catholic Bioethics Center and the Society of Law, Medicine and Ethics. Father Kennedy also served as the chairman of the ethics committee at the Jane Phillips Medical Center in Bartlesville and served on the Institutional Review Board for St. John Health System as well as their ethics committee. Father Kennedy is survived by his two brothers; James W. Kennedy and John W. Kennedy and Sharon, wife of James; Donna, wife of John; four nephews, James, Deryck, Jeremy and Adam along with great nieces and nephews. In lieu of flowers, donations to the Diocese of Tulsa and Eastern Oklahoma Priest Retirement Fund, the St. Elizabeth Building Fund, or the American Diabetes Association would be appreciated.

To order memorial trees or send flowers to the family in memory of Alexander Kennedy, please visit our flower store.