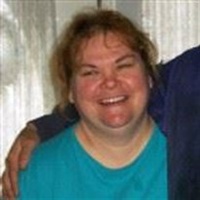 February 28, 2014 Anita Dianne Hudgins of Catoosa, 49, entered Heaven's gate on February 23, 2014 in Tulsa, OK. She was born on February 3, 1965 to Donald D Russell and Irene P Skeen in Parsons, KS. Anita was a passionate writer, she had written many books. Her and Shawn were inseparable. She obtained a nursing degree and loved her co-workers at Walmart. She really enjoyed listening to her son talk, visiting medieval events such as the renaissance fair, eating Chinese food, and spending time with her granddaughter. Preceded by her mother Irene. Anita is survived by her loving husband: Shawn Hudgins;
son: Josh Kane and his wife Samantha; and her granddaughter: Jessica Kane. She will be dearly missed by many. Visitation: 6-8 PM, Wednesday, February 26, Kennedy-Kennard Chapel
Graveside services: 2 PM, Thursday, February 27, Zena Cemetery
Kennedy-Kennard Funeral and Cremation
202 East Oak Street
Catoosa, OK, 74015
918.266.2112
kennedycares.com

To order memorial trees or send flowers to the family in memory of Anita Hudgins, please visit our flower store.