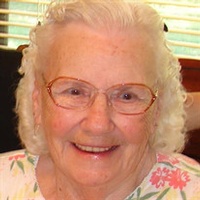 Arlene Bernice Reed of Catoosa, 88, passed away March 20, 2015 at Rolling Hills Care Center. She was born August 30, 1926 in Blackwell, OK to George and Ruth (Martin)
Snow. She married Frank Reed in 1945, two weeks after they met. It must have been love at first sight. They enjoyed 43 years together until his death in 1988. Arlene lived in Catoosa, OK since 1989. Arlene was Madam President of the Fraternal Order of Eagles. She loved birds, quilting, reading, traveling, search word puzzles, cards, checkers, puzzles, Dominos with her grandchildren, baseball games, ballet, and trips to Idaho, Illinois, and Alaska to see family. Arlene made the best fried chicken and could make a meal out of anything. She was very generous to donate her spare time and money to whom she felt needed it. As sweet as she could be, she didn't hesitate to give the thumb to discourteous drivers. Arlene liked her camping outings and was so excited when they purchased a Coleman stove. Listening to her tell her stories about she and her brothers growing up, you couldn't help but wonder how they made it, and made you realize how fortunate you are. All family dogs had a special place in her heart and she gave them many treats. Her Beagle Samantha, a gift from Andy and his family, was her Special Baby since she was a puppy 13 years ago. The family had a blue Parakeet she named Terry and she taught him to say "Pretty Boy" and he would give you a kiss. Terry traveled to Alaska with the family and he laid a couple of eggs to their surprise. While in Bellflower, CA she worked on the US Mercury, which carried Alan Shepard, the first American in space. Despite an 8th grade education she held many important jobs. Arlene was a Precision Inspector for 24 years working with Air Force Inspectors, retiring in 1989. Susan remembers that Mom could keep her secrets, and knows she is saying "my love to all of you" and blowing each of you a kiss. Arlene was preceded by her parents and brothers:
Charles, Harold and Jerry. She is survived by her loving children: Michael (Marsha) and Susan (David); grandchildren: Jim (Kelly), Andy (Kristen), Matt (Leslie), Adam (Athena), Shannon (Don) and Jason (Nicki); great-grandchildren: Maddison, Trevor, Reed, Garrett, Jaydon, Zain, Tanner, Holland and Drake; siblings: Louis, Merel, Ardella and Danny; and 21 nieces and nephews. Service: 6PM Monday, March 23 at the Chapel; interment:
Oakdale Memorial Park in Glendora, CA. Kennedy-Kennard Funeral & Cremation, 918.266.2112, kennedycares.com.

To order memorial trees or send flowers to the family in memory of Arlene Reed, please visit our flower store.