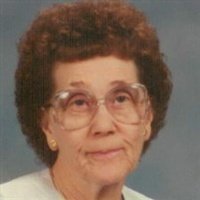 Beatrice Yocham Smith 91, was born on May 27, 1924 to WM Graham & Savannah Matlock in Rogers, Arkansas. She enjoyed playing the piano as well as the organ, sewing, making dresses and watching basketball.
Beatrice worked as a mail carrier for McDonnell-Douglas during WWII & in 1959 she became a restaurant owner when she opened Lil' Abner's Dairyette in Catoosa, Oklahoma.
Beatrice passed away on Friday December 18, 2015 and leaves behind two grandsons:
Brad & Wes Ham; grand daughter: Shelley Saunkeah; great-grandchildren: Jake Ham, Jessica Wiggins & Jennifer Ham; great-great grandchild: Colton Wiggins. She will be missed and can now be reunited with her friends and family that passed before her.

To order memorial trees or send flowers to the family in memory of Beatrice Smith, please visit our flower store.