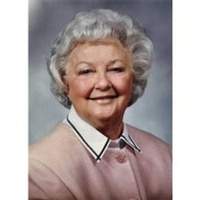 August 4, 2011 Betty Boyd's love affair with Tulsa began on December 9, 1924 when she was born at home near Owen Park. She was the daughter of Ted and Marie (Fairchild) Carman. She was raised by her mother, grandmother and an assortment of maiden aunts so women working outside the home were the norm to her. She attended Pershing, Roosevelt, and Tulsa Central High school where she was yearbook editor. She went to college at TU and Iowa State with a double major in home economics and journalism. She was a member of Delta Delta Delta sorority. She married Bill Boyd on August 31, 1943. She worked in Tulsa's airplane plant while Bill was flying B-24s in Italy. Betty and Bill had two children-
Beverlie in 1947 and Barry in 1950. Bill survived the polio epidemic of 1948. In an attempt to repay, in some way, for their care during that time; Betty joined the March of Dimes Speakers' Bureau. This led indirectly to her trying out for a broadcast opening at KOTV. She started the Women's Page show in December of 1955. That is when our beloved Edith Price came into the home to help care for Beverlie and Barry. Betty worked at KOTV until 1965 when she left her friends there to go to KTUL where she was on the air daily until 1980. She then indulged her life-long love of education by becoming the Public Relations Director for Tulsa Technology Center. She loved and enjoyed the position until 1990. Instead of retiring (which she swore never to do), she ran for the Legislature. She was elected to the State House of Representatives and served for 10 years. She was especially proud of her legislation in the areas of education and health care. After leaving the legislature, Betty served on the School Board for Tulsa Tech. She was a member of many organizations including Defense Advisory Committee for Woman in the Service during which time she loved to tell of landing on and taking off from an aircraft carrier. She also served on the National Board of the March of Dimes, American Women in Radio and Television, Tulsa Cerebral Palsy Association, and Beta Sigma Phi. "Retirement" activities included Friends of the Library, Tulsa Health Department Board, Silver Haired Legislature, Area Agency on Aging, and OSU Board of Trustees. She is preceded in death by her parents, and her husband Bill. She is survived by a sister, Judy Turner of Henderson NV;
daughter Beverlie (Barry) Bryant; son Barry (Karen) Boyd; grandchildren Julie (Steve)
Boyd Patuto, Barry Bryant Jr, Bill (Meleah) Bryant, and Bryn (Shawn) Bryant Wisdom; and great grandchildren Chelsea, Jonathan, Lauren, Braden, Jimmy, and Kevin. Donations may be made to Clarehouse, St. Francis Hospice, Tulsa Technology Center's Betty Boyd Scholarship, or your favorite charity. Visitation: 9AM-3PM Tuesday, January 11 and Wednesday, January 12, 9AM-8PM Thursday, January 13 at Kennedy-Kennard Funeral &
Cremation; service: 2PM Friday, January 14 at First Baptist Church. Kennedy-Kennard Funeral & Cremation, 918.251.5331

To order memorial trees or send flowers to the family in memory of Betty Boyd, please visit our flower store.