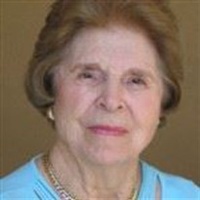 August 11, 2011 Betty Malloy Diamond died Saturday July 10 at her home in Montereau. A rosary will be held 7PM Wednesday, July 14 at Montereau, 1600 S. Granite. A Requiem Mass will take place at 10AM the following morning at Christ the King Church, 1500 S. Rockford. A burial service will be held at 2PM at Holdenville Cemetery. Betty was born November 6, 1920 in Lehigh, OK to Mary and Dewey Malloy. She graduated from high school in Wewoka, attended Stephens College in Columbia, MO and graduated from The University of Oklahoma in 1941, where she was a member of Pi Beta Phi. She married Harry H. "Bud"
Diamond on May 1, 1942 and they lived in Holdenville most of their lives. He predeceased her in 2006. She is survived by her daughter Marge and her husband John of Tulsa; sons:
Jeff and his wife Nance of Shawnee and David of Salt Lake City, UT; 8 grandchildren, their spouses and 12 great-grandchildren. Memorials may be made to The Harry and Betty Diamond Scholarship Fund at The University of Oklahoma, 100 Timberdell Rd., Norman, OK 73019. Kennedy-Amis-Kennard Funeral Service, 918.251.5331.

To order memorial trees or send flowers to the family in memory of Betty Diamond, please visit our flower store.