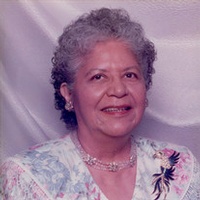 Betty Lou Buckley was born May 16, 1934 in Wetumka, Oklahoma to Rufus and Augustina (Gussie) Coachman Buckley who were both hard-working individuals and owned a large farm outside Wetumka, Oklahoma. She attended primary school in Eufaula, Oklahoma and grew up with her seven brothers and two sisters, helping her parents work the farm. In her teen years she graduated from Chillioco Indian School where she met Clifton Frederick Hill and later married him.
Betty's father, Rufus, was also a minister and and Gussie taught their children the traditional ways of the Muscogee people and the entire family was active in church and serving God. This provided Betty with a firm cultural and spiritual platform in which she would approach life and become a true help mate to Clifton. She stood side by side with Clifton while they organized the Creek Centralization Committee in the fight for "Free Election for Tribal Chiefs" in 1958, which was won in 1973 and gave the Muscogee-Creek people the right to choose their own chief and their own destiny, therefore providing health, education and welfare for their mighty nation. She loved going to church, reading her Bible, and visiting other church's on Fourth Sunday. She was always willing to help others in whatever capacity was needed.
In addition to her church work, Betty became a Licensed Practical Nurse, sometimes walking all the way to Okmulgee Tech from her home to attend classes, in addition to being a mother of three active sons. After receiving her graduation certificate, she began a thirty-year career in nursing at Oklmulgee Memorial Hospital, working in the ER, the Out-
patient department, the Labor Unit, the Gerisite Unit, Hope Unit and 2 East and 2 West. Many people today remember her assisting in the birth of their child and that she was a dedicated and hard worker.
Our beloved Betty left his physical world at 2:00am and merged with the Infinite on Thursday, September 10, 2015 at Okmulgee Memorial Hospital, and is now with her Heavenly Father and Saviour, Jesus. There is great celebration and homecoming taking place as she is now with her beloved husband, Clifton, her Mother and Father, Rufus and Gussie Buckley, her brothers Cozier, LeeDon, Harvey, Henry, Lewis, Wadie and sisters Geneva, Martha and Yvonne.
Those of us who remain here to celebrate her life are her Sons, Nathanial Anthony Hill, Wilburn Kirby Hill, Clifton Christopher Hill, Granddaughters Emily LouAnn Ibarra Gonzalez and husband, Edgar and children Edgar Aaaron, Adan Alexander and Giovanni William, Rebecca Lynn Hill and her daughters May Lynn and Lilyanna Rose, Grandson Aaron Christopher and his daughters Amira Janice, Layla Aaron, Trinity LouAnn, as well as family friends, Winona Henderson, Veronica Pipestem, Jordan Evans and a host of many friends and family.
A private memorial service will be held in Tulsa with immediate family in attendance.

To order memorial trees or send flowers to the family in memory of Betty Hill, please visit our flower store.