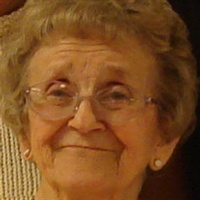 At the age of 87, Betty June McConnell of Tulsa, Oklahoma, entered eternal life on May 9, 2015, in Catoosa. She was born in Slayton, Minnesota on June 6, 1927, to William P. and Ida E. (Berglund) Tyrrell. June was a high school graduate and worked in retail as a young adult. She retired in 1990 as a scale operator for Chandler Materials in Tulsa. June's passion for crocheting and needle point provided gifts of love and lasting memories not only for her family but also her church family. June was a long-time member of the Disciple United Methodist Church in Catoosa. On May 24, 1947, she married Richard Hugh "Dick" McConnell and together they created a beautiful family. From 1947 to 1963, Dick and June raised their children on the160 acre family farm in Slayton, Minnesota. June knew her way around a farm. She was raised as a farm girl and had no difficulty in performing all the required chores of a working farm from tending to livestock to harvesting crops. While on the farm, June enjoyed playing the piano as the family sang hymns such as her favorite In the Garden.
June was preceded by her parents and siblings, Bud, Murial, Doreen and Lenore; son, Thomas Hugh McConnell; and her husband, Dick. June is survived by her children, twin sons: Lyle Robert McConnell and his wife, Charlotte, of Marion, AR, and Michael William McConnell and his wife, Barb, of Wynne, AR; daughter, Linda Marie Jones, and her husband, Larry; and son, Dale Richard McConnell, and his wife, Lynn, all of Catoosa. Grandchildren: Marla Jones and her husband, Logan; Kyle McConnell and his wife, Sabrina; Kent McConnell and his wife, Ruby; Nikki Harrison and her husband, Michael;
Michael McConnell and his wife, Dawn; Michelle, Tarla and Larry Dale Jones; Doug McConnell; and Raevyn McConnell-Pagan, and her husband, Alex. Great grandchildren:
twins, Emrie Lea and Olivia Grace Graves; Gavin Logan; Owens and Sanders McConnell;
Ella McConnell; McKinsey and Bralon Glasier; Nathan, Bailey and Toni Harrison; Emmarie and Evan McConnell, Robert "Bo" Dale and Louren DeLong; Tabias D'Orsai; Aiden and McKenna Jones; Odin McConnell; and Jylian and Jocelyn Pagan. Great-great grandchild, Aubree Gablenz.
Services: 2:00 P.M. Saturday, May 16, 2015, Disciple United Methodist Church, 1883 S Cherokee St, Catoosa, OK 74015 Interment: Memorial Park Cemetery, 5111 S Memorial Drive Tulsa, OK 74145 Kennedy-Kennard Funeral & Cremation, 918.266.2112, kennedycares.com

To order memorial trees or send flowers to the family in memory of Betty McConnell, please visit our flower store.