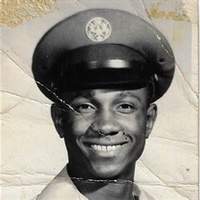 Billy Ray Gibson 75, of Sapulpa, passed from this life on July 28, 2018. He was born December 2, 1942 in Sapulpa to Welda and Doretha Gibson. He graduated from Sapulpa High School. After graduating Billy proudly served his country in the United States Air Force. Following his military service he attended Paul Quinn College in Texas. Billy worked for the United States Post office for twenty years, following that he worked for the Department of Human Services. The thing he was best known for to his family and friends was that he was a sports fanatic! He loved them all, baseball, football, basketball and the list goes on Billy was loved by many and will be missed by all who knew him. Billy is survived by three sons: Jamal Gibson of Alabama, Kwame Gibson of Los Angeles, California, Carl Wayne Gibson also of Los Angeles, California, his mother: Doretha Gibson of Kansas City Missouri, two grandchildren, brothers: Cordell Gibson of Arlington, Texas, Gregory Gibson of Kansas City Missouri, and Randy Gibson of Kansas City, Missouri, sister: Rose Marie Gibson of Kansas City Kansas, and a host of nieces, nephews and many friends. He is preceded in death by his father: Welda Gibson, sister: Sandra Kay Gibson, brother: Bobby Gibson and nephew: Michael Page.

To order memorial trees or send flowers to the family in memory of Billy Gibson, please visit our flower store.