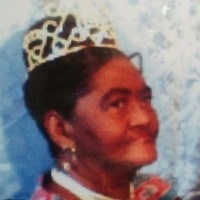 Blanche Marie Scott was born on July 16, 1932 in Wetumka, Oklahoma to the union of Arthur and Nellie Scott. Her parents died when she was five years old so she was raised by her oldest brother Roosevelt and his wife Jodie. Blanche attended Wetumka schools, she was the football queen her in junior year at Douglass High School in Wetumka. After completing her high school, she decided to move to Kansas City, Kansas with her sister Hazel. Years passed and she moved to Tulsa to be with her older sister Erdest Hill, where she resided until her passing on November 21, 2019.

She is survived by her mother Jodie Scott, her Children, Beverly Jackson, Linda Hawkins (Todd), Clarence Scott, Christopher Scott, La Shawna Scott all of Tulsa, Oklahoma. Her sister Clytee Johnson of Oakland, California; a sister in law Sharon Scott of Yukon, OK. She had a big family, 30 grand children, 50 great grand children, 45 great-great grandchildren and host of nieces, nephews, and other family and friends.

To order memorial trees or send flowers to the family in memory of Blanche Scott, please visit our flower store.