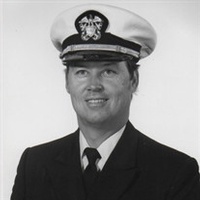 Bobby Gene Smith, age 78, passed away on Sunday, October 16, 2016, in West Richland, Washington. He was born on May 8, 1938, in Tulsa, Oklahoma to Addlee Verse (Thompson) Smith and Cleo Leroy Smith. Bobby was the Grandson of Molly (Chadwell)
Thompson and Hiram Thompson on his mother's side and Ruby ("Granny Morrow") Eck and Fred Smith on his father's side, and older brother to Darrell Smith and Sharron (Smith) Loyd. The family had many cousins with whom Bobby grew up but most notably Cousin Sheilda (Conley), Cousin Duck (Henry Robinson) and Cousin Jerry (Robinson). During his childhood Bobby could frequently be found running with his cousins Sheilda, Duck and Jerry where he was usually the goofball of the group and the kind-hearted troublemaker at his Aunt Porter's house. After high school, Bobby joined the United States Navy and started using the name "Robert." While in the US Navy, he served in the South Pacific as a navigator and pilot, flying reconnaissance missions from US Navy aircraft carriers in the 1960s. After leaving the US Navy as a Lt. Commander, Bobby attended San Diego University and earned a Bachelor's Degree and a Master's Degree in Public Administration. Following his university studies, Bobby worked as a technical writer, writing repair manuals for military planes and other military equipment. Everywhere he went, he made lasting friendships by being a constant source of positive energy and humorous stories. He always had a joke to tell or a funny story from his childhood to put a smile on someone's face. When not the life of a party, he loved to tell stories to his daughters, play with animals, keep current on public affairs, read about scientific discoveries, figure out how things worked and putter around in the garden. He never let go of his childhood curiosity and love of life. Animals loved him almost as much as he loved pecan pie and there wasn't a person who could resist laughter as he danced his heart out to his all-time favorite song, "Funky Town." Throughout his life he was convinced that he could successfully address most car repair issues with duct tape and super glue. His jovial nature and gentle heart will be missed by all who knew him. He is survived by his three daughters, Nicole, Melissa and Caroline, and his second wife Blanca, who took loving care of him until the end.

To order memorial trees or send flowers to the family in memory of Bobby Smith, please visit our flower store.