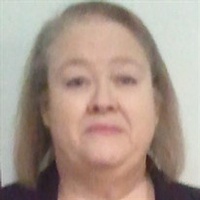 Cathy Jean Wimberley was born on August 17, 1954 in Montgomery County, Arkansas to Bill Crump and Irene Harper. Cathy attended Waldron Schools during her formative years, and went on to graduate from Rogers State College's nursing program to become a Licensed Practical Nurse. In her free time, Cathy loved to read, crotchet and spend time with her grandchildren watching Disney movies. Cathy Wimberley passed away on March 31, 2016 at the age of 61 in Tulsa, Oklahoma. She was preceded in death by both of her parents, her husband: Andrew Wimberley and her brother Dale. She leaves behind to cherish her memory, son: Andrew and his wife Tara Wimberley, daughter: Cathleena and her husband Ronny Baker, grandchildren: Seth Wimberley, Weston Baker, Jordan Baker and Haley Baker, brother: James Crump, sisters: Alice Fimple and Sherry Duncan, as well as many other nieces, nephews, cousins and friends.

To order memorial trees or send flowers to the family in memory of Cathy Wimberley, please visit our flower store.