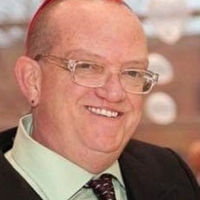 Charles E. "Chuck" Courtney 50 of Tulsa, went through the veil and met his elders on Nov. 10, 2019 at OSU Medical Center in Tulsa, Oklahoma. Chuck was born on September 09, 1969 in Phoenix, Arizona to Charles I. Courtney and Sandra S (Bright) Parker. Chuck graduated from Kiefer high school in Kiefer, Oklahoma and went on to attend Platt Community College in Tulsa where he graduated with an Associates in Applied Science in Auto-body repair. He had worked at various Jiffy Lube's and auto body shops throughout his career.

Chuck found his passion in life was helping others, literally he would give his shirt off his back and not think twice about it. His desire to help and heal others from anything led him to co-found the Grateful Day Foundation in Tulsa, which serves HIV/AIDS community to provide a four day retreat each year in Oklahoma for individuals who have been affected by the disease. He became a pillar in the LGBTQIA community and was heavily involved with Oklahomans for Equality and was a champion for those affected. Chuck's greatest achievement in life was being a father to his daughter Bayli and grandpa to his first grandbaby "Keke"

Chuck is survived by his sister Brenda Courtney of Mounds, Oklahoma, a nieces Sarah and Devynn and nephews Phillip and Jesse. He is survived by his closest "Maniacs" Michael James, Elroy Avery, Juan Alday, Jeff & Paul Tarwater- McClure, Colby and Brandon Rogers-Plott Along with his lifetime buddies Jerry Staley, John Sorrell and Bryan Capehart, and Jackie Davidson along with a host of many, many friends and family in Chuck’s world that loved him so much. Chuck was a very blessed man along with a host of friends and family.

Memorial service will be at 11:00am Saturday November 23, 2019 at the Oklahomans for Equality Center (OkEq.)

To order memorial trees or send flowers to the family in memory of Chuck Courtney, please visit our flower store.