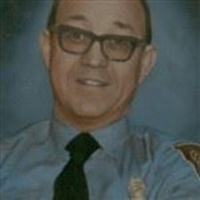 January 14, 2014 Clarence Buford Merckling Jr. of Tulsa, 92, entered eternal rest on January 12, 2014. He was born on September 19, 1921 to Clarence Buford Merckling Sr. and Lydia Barrick in Okmulgee, OK. Clarence grew up in Okmulgee, OK where his father was the lake custodian. His love of fishing and the outdoors was fostered by the years he spent on and around Lake Okmulgee with his father. He continued to enjoy camping, hunting, and fishing well into his adult life which helped him introduce his love of the outdoors to his children and grandchildren. Clarence worked for the Okmulgee fire dept. for 22years from 1948 to 1970. He moved to Tulsa shortly after and worked at Rolling Hills Redbud for close to 20 years, then retired to enjoy his senior years. Clarence served in the US Army. Preceded in death by one great granddaughter, Clarence is survived by his loving wife: Phyllis; children: Teresa McKaig of Bixby, Harold Helt of Chelsea, Vikki Handley of Salina, Brenda Jones of Tulsa, and Steve Stutchman of Tulsa; thirteen grandchildren and six great grandchildren. Visitation: Tuesday, January 14, 6-8PM, Kennedy-Kennard Chapel
Graveside Services: Wednesday, January 15, 2PM, Okmulgee Cemetery, Okmulgee, OK
Kennedy-Kennard Funeral and Cremation, 202 East Oak Street, Catoosa, OK http://youtu.be/Pua_FEcAemw

To order memorial trees or send flowers to the family in memory of Clarence Merckling, please visit our flower store.