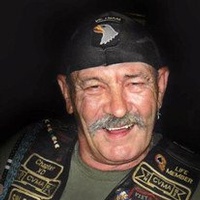 Cletus Eugene Brasel was born on August 12, 1950 in Chicago, IL to Betty Ward and Jack Brasel. He moved to Tulsa as a child, grew up on Tulsa's Northside, and attended Central Infantry Division. He was awarded two Bronze Stars for his bravery in battle. After returning home, he began working for American Airlines where, after 37 years of service, he retired as a Crew Chief. Many of his coworkers became lifelong friends.
Cletus loved athletics. He played several sports as a child and fast pitch softball for many years as an adult. Cletus had a passion for coaching that began as a teenager coaching basketball at Springdale Recreation Center and carried on into his 40's coaching football, baseball, basketball, and wrestling teams at Foster Middle School and Cascia Hall. Cletus'
competitive streak was well known. If you were pitted against each other, he was trying beat youbadly. He was a tremendous OU Football fan and was usually found sporting crimson and cream.
Cletus also loved riding motorcycles. He enjoyed riding with his brothers from the Combat Veterans Motorcycle Association (CVMA). Some of his favorite days were spent exploring the U.S. on his motorcycle riding with buddies. He was proud of his award winning custom Harley and always found a way to ride, even when it meant trading in 2 wheels for 3.
Cletus is survived by Kelli Garrison and husband Steve, Kimberly Ferguson, Dustin Brasel and wife Heather; Grandchildren James Fry and Fiancee Felicia Rambo, Jesse Fry, Kaitlyn Fry and Fiancee Cody DeGraw, Christina Brasel, Jacob Knight, Robert Ferguson, Samantha Ferguson; Great Grandchildren Adalynn Fry Mason "Tank" Fry, Adra Perry, Donovan Gordon, Len Page. He was preceded in death by William Henry Dean Ferguson and Connie Mattingly, the mother of his children.
Those who knew Cletus knew that his soul was gentle and his heart was big and open. He fiercely loved his family and friends and would do anything to support or stand up for them. In fact, unless you gave him a reason otherwise, he would do the same for a complete stranger. He could entertain a whole room with his stories and make you laugh until you cried. When Cletus cared about someone or something, you knew it. Whether it was OU Football, his kids/grandkids/great grandkids, his motorcycles or his friends, he spoke his mind and was wholly committed. Cletus changed the lives of those he knew. He influenced generations of athletes through his coaching, opened up his home to those in need, sacrificed and worked hard to support his loved ones and ensure they could achieve their dreams, and was the friend who was always there any time, any place.
His family would like to offer a special thanks to those who were closest with Cletus over the past couple years. Life hadn't always been easy and it had gotten progressively harder as he bravely fought to stay strong and healthy. Whether it was a meal, a Dr. Pepper or just a few minutes of company, thank you for being there for him.

To order memorial trees or send flowers to the family in memory of Cletus Brasel, please visit our flower store.