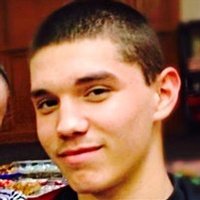 David Shane Hamilton was born on May 30, 1998 in Tulsa, Oklahoma to Eric Hamilton and Ryan Miller Naifeh.
Shane, as everyone called him, was a wonderful young man who loved playing video games, listening to music, watching movies, playing with his Pitbull Akela' and spending time with his family and friends.
Shane passed away on September 24, 2016 and was preceded in death by his grandparents: John and Marilyn Miller, Aunts: Jennifer Miller , and Jeannie Hamilton. Shane leaves behind to cherish his memory, father: Eric Hamilton, mother: Ryan Naifeh and husband Benny, siblings: Ryan Hamilton, Brooklyn Jackson and Ever Naifeh, grandparents: Barbara and Danny Hamilton Sr., girlfriend: Megan McBroom as well as numerous aunts, uncles, cousins and friends. Shane left this life far too early and touched the hearts of everyone he knew. He will be forever in our hearts and missed always. We love you this muchNothing will ever come between us.

Kerry lit a candle in memory of David Shane Hamilton

To order memorial trees or send flowers to the family in memory of David Hamion, please visit our flower store.