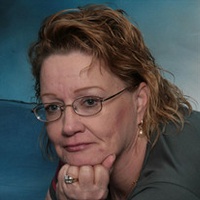 Deborah Ann Ledbetter was born in Tulsa, Oklahoma on December 8, 1956 to Edward and Hertha Jones. She went to high school at East Central and graduated class of 1975. After high school she went on to earn her cosmetology license and began a long career as a hair dresser. Deborah continued her education earning a Bachelor's Degree in Social Work from the University of Oklahoma while she raised three daughters. Deborah began her new career as a social worker upon her graduation from college at the Department of Human Services. She worked there for 13 years and continued to do the hair dressing for her friends and family as well as volunteer her time to the Pregnancy Center for unwed mothers. Deborah was a busy woman, but always made time for her beloved grandchildren, going out dancing or to country music concerts. In her spare time she enjoyed reading and supporting her favorite teams, the St. Louis Cardinals and the Oklahoma Sooners. Deborah had a love for the music of Elvis Presley and developed quite a collection of his memorabilia. She leaves behind to cherish her memory, her husband: Michael Ledbetter, father: Edward Jones, brothers: Edward and David Jones, daughters: Kendall Lamb, Sarah Lamb, Elaina West and husband Ace & Jeanmarie Meier and husband Josh Pass as well as her nine grandchildren. She was preceded in death by her mother: Hertha Ramey and her baby sister: Cheryl who she goes on to join in heaven.

To order memorial trees or send flowers to the family in memory of Deborah Ledbetter, please visit our flower store.