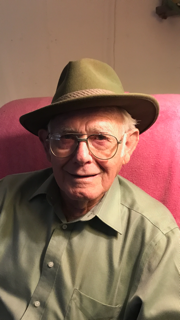 Earnest lived his childhood life around Marshall, AR. At the age of 16 he started in drywall - He was a drywaller his entire life. He had numerous businesses. His last business was O'Neal Drywall Co. in Tulsa, OK. His companies did residential - commercial & all types of construction jobs.

Through his life he met and employed numerous men that became great friends. The greatest achievement that he took a lot of pride in was working on churches throughout the United States. With his church life he met many, many friends that he will always be their friend. He did an outstanding work for God.

He was married for 67 years to Barbara June Dampf O'Neal. She precedes him in death.

He is also preceded in death by his sister, Ressie Holder, and a daughter, Barbara Carrol O'Neal Rowsey & her husband/son-in-law, Benny Rowsey.

Earnest worked very hard in his life, loved all his family, loved all of his friends. He was a great example to everybody that knew him.

A true living legend that will never be forgotten and always be loved.

To order memorial trees or send flowers to the family in memory of Earnest Oneal, please visit our flower store.