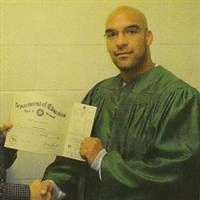 Eric Courtney Harris was born in Compton, Ca. on October 10th, 1971 and went to be with the Lord on April 2nd, 2015.He was the son of Walter Levine Harris and Jennifer Ann Bacon both of Ann Arbor, Michigan. Eric is succeeded by his son Aidan Fraley of Lebanon, Tennessee , his brother Andre Harris and wife Sheila of Claremore, his sister Lisa Colvert of Tulsa , and brothers Chris Preston and Joey Peigne(pronounced pin-
yay)both of Tulsa ,his Aunt Nancy Hall of Ypsilanti,MI. His Aunt Kim Bacon and uncle Paul Bacon of Los Angeles,CA. He had several nieces and nephews and cousins that will miss his funny demeanor.
Eric will go to be with his Grandmothers Margaret Harris and Mary Bacon and Grandfathers Walter Harris Sr. and Paul Bacon.Eric grew up in Jordan Downs projects in Watts with his mom and little brother Andre. They had a modest childhood but his mother always taught them to share and give what little they did have and this big heart carried into his adulthood until the day he passed. Eric and Andre would do many cool things with their grandpa Harris such as: Universal Studio,, SeaWorld ,Busch gardens, magic Mountain, anything a kid would want to do in California Grandpa made it happen, Some of the best times were going to the beach and fishing too.Their mother would meet a man and move to Owasso at age 14 years old. Eric liked to be a typical boy and ride bikes ,skateboard and even let the dogs out at the pound one time. Eric would move to Norman and there met a young lady named Cathy Lou Fraley who was his long-time love and they had a beautiful son named Aidan Macaih Fraley.Eric's ornery side ended him in and out of prison for a lot of his adult life. There he used his time to get certifications in plumbing, framing and wood-work he also got his GED. Eric read and memorized a lot of the bible while doing time although he hadn't experienced the truth in his life yet he has been out since Sept. of 2014 and in these last 7 months has had an opportunity to see the power and love of Jesus thru the life of his brother Andre. Eric had a chance to spend a couple of weeks with his son in Tennessee and he was so proud of him and spoke of how he wanted him to come live with him once he got everything in order,he loved him so much. Eric was also able to go visit his 94 year old Grandma with Andre before she passed in December. He enjoyed assisting Andre with his ministry work and when given a chance he started sharing Jesus with anyone in his life that would listen. He was an awesome poker player and enjoyed just sitting and talking one on one about life especially with his best friend and girlfriend Faith. Eric was slowly working his way back on the right path and prayed and attended church with Andre and Sheila some. He was always -Always happy and didn't care for the material things in life. He was happy with a few dollars and a small simple home that he kept spotless at all times. We could all learn from Eric that money doesn't buy happiness, he was never ever in a bad mood and always cutting up and making his friends laugh, if all he had was $5.00 and you needed it he gave it to you and would do without. He knew that Jesus was real and we are certain he is now finished with struggling and at peace and joy with his Savior. Eric would want us to remember him and laugh and hold our heads high not low. I am sure he is looking down and proudly at all the family and friends who have gathered to honor him and tell him we miss him and we love him so much.
Service: 10:00 AM Wednesday, April 08, 2015 at Regency Park Church Of The Nazarene with Pastor Geoffrey Gunter and Pastor Andre Harris officiating; interment: Wofford Cemetery in Catoosa,Oklahoma. Kennedy-Midtown Funeral & Cremation, 918.599.7799, kennedycares.com

To order memorial trees or send flowers to the family in memory of Eric Harris, please visit our flower store.