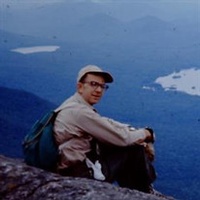 George Mowry Rosenberry, Jr. was born in Pottstown, Pennsylvania February 8, 1924 to his parents George M. Rosenberry, Sr. and Anna Hall Rosenberry. His mother died when he was two. At the age of 10 he moved to Oklahoma where his father was working in the oil fields as an engineer. He later married Norma Rose Irwin of Wewoka, Oklahoma and enjoyed 67 years of marriage. His wife was his chief love in life. He served in the Pacific Theater in World War II as a communications specialist. When the war was over, he earned a bachelor's degree in electrical engineering from Oklahoma A & M in Stillwater, Oklahoma. He went to work for General Electric in Schenectady, New York, and worked for G.E. for his entire career. His last position was Manager of Advanced Engineering for the Small AC Motor Department in Hendersonville, Tennessee.
He loved hiking and he climbed the 46 highest peaks of the Adirondack Mountains, qualifying as a 46-er. He then hiked the 46 peaks in the winter, a notable achievement, qualifying him to be a Winter 46-er.
He loved God and served the Lord Jesus Christ by ministering to inmates in prison in Tennessee every week. His well-worn Bibles are testimony to the priority he gave to God's Word.
He is survived by his three children. These are Steven L. Rosenberry who is married to Melanie Shaw and lives in Delmar, New York; Susan George who is married to Gayton George and lives in Geneva, Illinois; and Tamara Marcum who lives in VanBuren, Arkansas. His five grandchildren are Anna Willemstein who is married to Paul Willemstein and lives in Hendersonville, Tennessee; and Laurel George, John Isaac George, Jacob Nicolas George, and Philip George who all live in Tulsa, Oklahoma.
His most quoted Bible verse is Psalm 5:12. "For it is Thou who dost bless the righteous man, O LORD, Thou dost surround him with favor as with a shield."
George died July 29, 2015 at the age of 91. As a righteous man, George has left a heritage in this world through the testimony of his faithful life and marriage, and the lives of his children and grandchildren.

To order memorial trees or send flowers to the family in memory of George Roberry, please visit our flower store.