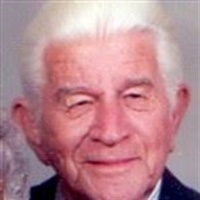 August 13, 2011 George A. Wenzel, age 83 years, 8 months and 6 days, entered eternal life September 12, 2008 at his home in Catoosa. He was born January 7, 1925 in Catoosa to William Washington and Pearl Lee (Shouse) Wenzel. George served his country honorably in the Army of the United States. He married Lois Maxine (Welch) June 7, 1945 in Catoosa. George was a retired painter who enjoyed his family above all, fishing, hunting, garage sales and singing. He was a member of the Glory Land Singers and Family Worship Center in Catoosa. George was preceded in death by his brother Marvin Wenzel. In addition to his loving wife, he is survived by his son Stanley Gene Wenzel and his wife Janice Ann; grandson Stanley Gene Wenzel, Jr. and his wife Marcie; great-grandchildren:
Zac and Ashlee; sister Louise Holbrook; and brother Billy V. Wenzel and several nieces and nephews including Dwayna Helm, who acted as his caregiver. Graveside service: 2 PM Monday, September 15 at Dick Duck Cemetery in Catoosa. Kennedy-Amis-Kennard Funeral Service of Catoosa, 266.2112, www.kakfs.com.

To order memorial trees or send flowers to the family in memory of George Wenzel, please visit our flower store.