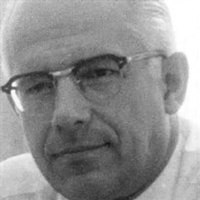 Herbert Dale Maresh was born on April 30, 1921 in Tulsa, Oklahoma to Lucy and Anton Maresh. Herbert was a member of Asbury United Methodist Church since 1969. He received a Bachelor's Degree in Mechanical Engineering from Oklahoma A&M and went on to work for Phillips & CE Crest Engineering. Herbert was in the Army Air Corp during WWII where he earned 3 Bronze Stars for heroic achievement and served as 1st Lieutenant in France and Austria. Herbert passed away on November 30, 2016 in Vinita, Oklahoma at the age of 95. He was preceded in death by his wife Betty Maresh, and leaves behind to cherish his memory, children: Cynthia Nielsen (Dick) of Houston, Texas and Karen Hedrick (Michael) of Afton, Oklahoma, grandchildren: Bryan, Jake, Tyler, Scott, Stephanie, Lisa and Krista, three great-grandchildren: Chloe, Holly and Lucia as well as many other family and friends.

To order memorial trees or send flowers to the family in memory of Herbert Maresh, please visit our flower store.