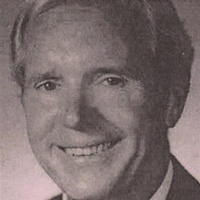 Jack Lee Mandeville was born December 22, 1924, in Houston, TX to Percy Rooke Mandeville and Mary Elizabeth (Happy) Eckerle. Percy worked for the Ford Motor Company and following a move to New Orleans, LA, the family settled in Oklahoma City in 1931 where Jack enjoyed a happy childhood with a beloved gang of friends to whom he was "Jackie" among a gang of "Stinky's," "Red's," "Butch's" and "Pudge's."
Jack graduated from Classen High School in 1942 at 17 and attended two semesters at Texas A&M before turning 18 and hitchhiking to Houston to join the Navy. He was sent to the Navy V-12 program at the University of Oklahoma where he received a B.S. in Mechanical Engineering. Following graduation, he was sent to Cornell University for Midshipman School (OCS) and commissioned an Ensign. Jack served aboard two troop transports (APA's) in the Pacific before being discharged and returning to OU for postgraduate studies in Accounting and Business Law. He was a member of Phi Delta Theta fraternity.
After a New Year's Eve spent doing inventory at a drug store, Jack decided accounting was not for him. The happiest guy he knew was selling insurance for Travelers Insurance. So he took a job with them in 1950 and was sent to the home office in Hartford, CT. From Hartford, he was sent to Kansas City, MO where in due course, he met and married Patricia (Patsy) O'Dowd in 1953. A transfer in 1954 brought them and their young son, Patrick, to Tulsa. By 1960, when Jack was invited to purchase an interest in a small insurance agency called Rich & Cartmill, their family had grown to include Carey and Mark. Along with his partners, his leadership, hard work and vision helped grow that small agency into a respected leader in the industry employing over 150 people with offices in four states.
Jack maintained an active presence in the insurance industry throughout his career serving on numerous boards, teaching classes and serving as president of the Independent Insurance Agents of Greater Tulsa, the Oklahoma Association of Insurance Agents and the Northeastern Oklahoma Chapter of Chartered Property and Casualty Underwriters.
Jack believed in giving back and supporting his community whether that community was his church, his industry, his interests, his children's schools or his city. Jack and Patsy were active members of Christ the King Catholic Church for 55 years. He was a member of the Downtown Tulsa Rotary Club for over half a century, served on the board of Marquette School as well as Bishop Kelley High School where his stewardship of their finances preserved the financial integrity and helped families pay tuition incrementally. Patsy and Jack were placed in the Bishop Kelley Hall of Fame for their contributions to the school. He showed his love of the arts by supporting the Tulsa Ballet, Tulsa Opera, Gilcrease Museum, Philbrook Museum of Art, the symphonies and Tulsa Town Hall. Jack was a lifelong student of history, philosophy and literature and could quote hundreds of poems from memory.
His sole nod to a midlife crisis was a blessedly brief fling with Scottish bagpipes subsequently replaced with running. Jack took up running in his late 30's and for decades could be seen on many side streets and major thoroughfares cap on, head down, regardless of weather logging mile after mile. He and two fellow enthusiasts founded the Tulsa Running Club to help grow the sport.
Jack was a man of many virtuesself-discipline, tenacity, dedication, prudence, justice, fortitude, faith, hope and charity. These virtues stewarded him throughout his life and enabled him to meet life's challenges and adversities such as the debilitating stroke in 1999 that left him partially paralyzed for the rest of his life and the loss of his beloved son, Mark, from ALS in 2010. Jack did not feel sorry for himself or quit living a full and joyful life. He had developed a passion for oil painting in his 60's and following the stroke, taught himself to paint with his left hand. He continued to exercise and travel, read and study until the ability to do those things slipped away. He never lost his love for his God, his family or life and leaves a remarkable example of a life fully and remarkably lived. Jack is survived by his wife of 64 years, Patsy, his childrenPatrick and his wife Jeanne Mandeville, Carey Cole and her husband Mike and daughter in law Melanie Mandeville, as well as his grandchildrenKara McIntyre (Dave), Mike and Nedda Mandeville, Hannah and Margaret Cole, Haley Cole Lewis (J.L.), Mallory, Mary, Molly and Madeline Mandeville and four great-grandchildrenEllie and Gus McIntyre and Harper and Susannah Lewis. Memorial contributions may be sent to Marquette School, Bishop Kelley High School or a charity of choice.
A Rosary will be held at 7 p.m., Sunday, February 19, 2017. Funeral services will be at 10:30 a.m., Monday, February 20, 2017. Both services will be held at Christ the King Catholic Church 1520 S. Rockford.

To order memorial trees or send flowers to the family in memory of Jack Mandeville, please visit our flower store.