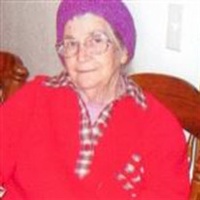 March 25, 2013 Jane Dewit, of Catoosa, 95 passed from this life March 21,2013 at Rolling Hills Care Center in Catoosa. She was born February 11, 1918 in Pryor to Thomas Jefferson Coghill and Ollie Mae (Carver) Coghill. Jane married Jendie (Shorty) Dewitt October 21, 1939 at Dawson Baptist Church in Tulsa. They celebrated their 50th anniversary October 1989. Jane sold Avon for 29 years, raised Chihuahua Dogs and Parakeets. She loved to Squirrel Hunt and was a crack shot with a rifle. Jane could kill more squirrels than any man in the hunting party, her keen eyesight contributed to her success. She was an avid Gardener and canned their winter food as well. Jane and Shorty were not blessed with children of their own but they helped raise many of their nieces and nephews as well as helped others. Jane lived long enough for her Great Nieces and Nephews to know her. Jane was preceded in death by her Husband, Shorty DeWitt, her parents, five brothers, Cecil, Andrew, Orville, Ben, Billy, one Sister, Nora Campbell and a host of nieces and nephews who loved her dearly. A Special aunt will be greatly missed by all of us. A 95th Birthday Party was held in her honor at Rolling Hills Care Center February 10,2013. Services were held Monday March 25, 2013 at the First Baptist Church in Catoosa, Reverend Donald Hogue, Jr, officiated. Interment was at Wofford Cemetery. Pallbearers were Kevin Martin, Darryl Martin, Donnie Martin, Danny Lee, David Lee, and Billy Coghill. Kennedy-Kennard Funeral & Cremation, Catoosa, 918.266.2112. kennedycares.com

To order memorial trees or send flowers to the family in memory of Jane Dewit, please visit our flower store.