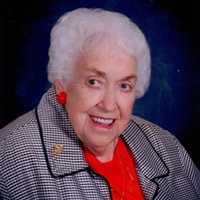 Jerry Nell Hart Erwin went to be with her Lord and Savior on October 12, 2015 at the age of 85. She was born June 5, 1930 in Henrietta, OK to Jesse Walter & Dosha Hart. She grew up in Henrietta and graduated from Henrietta High School in 1948. She married Frank Erwin August 14, 1949. They were married for more than 25 years. She was preceded in death by her husband, her parents, six siblings and her daughter-in-law, Sarah. She is survived buy her son Frank Erwin and his wife Brenda of Glenpool, OK, son Walter and his wife Kathy, of Tulsa, OK, and son David, of Tulsa, OK, grandchildren Bryan Erwin and his wife Dusty of Gordon, Texas, Angie Erwin of New York, New York, Jason Erwin of Austin, Texas, Matt and wife Niki of Jenks, OK, Holly Erwin of Bixby, OK, Kyler Erwin and his wife Ashley of Jenks, OK and seven great grandchildren and one on the way.
Jerry Nell was a cheerleader and played a leadership role in High School and with her Henrietta Hens alumni group. Frank and Jerry moved to Tulsa in 1952 to raise their three boys. She enjoyed managing Dairy Queens for over ten years and taught her sons a great work ethic as they all worked together at Dairy Queen. Later she worked at Blue Cross and Blue Shield in the claims department. In 1990 she began to work for Price Mart as a demo lady and that's when Grandma Jerry was born. She won several blue ribbons for peanut brittle and it became her calling card. She loved entertaining and you never knew what funny hat or costume that she might come up with. She had a clown/balloon ministry with her church and entertained at other events. She believed that Laughter was the best medicine and she sent jokes and funny stories to many friends that needed a smile. She was also a great storyteller and when the world needed a smile she made sure it happened!
We all Love You Mom, Mema, Grandma Jerry, Jerry Nell and we will miss your love, your laughter, your smile, and the joy you gave to all of us!

To order memorial trees or send flowers to the family in memory of Jerry Erwin, please visit our flower store.