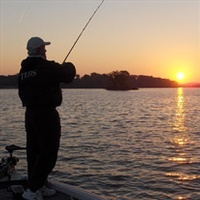 James Cecil Coulson, Jr, 65, passed away Friday, August 7th.
Jim was born May 14, 1950, in Tulsa, Oklahoma and was a lifelong area resident. In his youth, he loved playing basketball and baseball, and later played bass guitar in a local band. He graduated from McLain High School in 1968.
Jim owned Ted's Hamburgers in West Tulsa. He began working at the restaurant when his father opened the doors in 1963. Jim was always a mentor and light-hearted prankster to all his employees throughout the years. He recently celebrated the 50th anniversary of the business.
Jim's greatest passion was fishing. He was well known in the bass fishing community and a highly accomplished bass tournament fisherman. His favorite local spots were Grand, Hudson and Ft. Gibson lakes. His other hobbies were bowling and he held season hockey tickets with the Tulsa Oilers for 19 years.
He is survived by his mother, Priscilla Coulson; wife, Cheryl Schoeffler; sister, Jean Ann McKay; brother Gary Coulson and wife Lynn Coulson; brother Greg Coulson; daughters, Jody Cullison and Jamie Allen; son, Colby Coulson and wife Christy Coulson; step-
daughters, Racheal Edwards and husband David Edwards, Crystal Scheulen and husband Denny Scheulen, and step-son Darrell Elrod and wife Stacy Elrod. He is survived by 19 grandchildren and 2 great-grandchildren.
He was preceded in death by his father, Ted Coulson.
The memorial service will be at 11:00 am at the Community of Christ Church in Sperry, OK. Elder Charles Rowden will officiate. In lieu of flowers, donations may be made to readingpartners.org. As Jim always said, "if you read a book, you'll be smart."

To order memorial trees or send flowers to the family in memory of Jim Coulson, please visit our flower store.