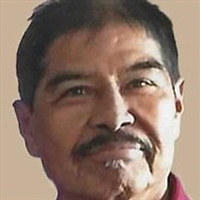 John Modesto "Moody" Castillo Sr. was born on June 15, 1941 near Matamoros, Mexico. His parents, Emilio Castillo Sr. and Maria De Dominguez Castillo, had crossed the border to buy coffee and sugar when Modesto arrived a few weeks earlier than expected, making him the only one of his siblings born outside of the U.S. He grew up and went to school in Donna, Texas. When he wasn't in class, he followed the harvest with his family, picking onions, watermelons, radishes, and cantaloupe. When he was a young man, he served in the Mexican army and had a short stint as a professional boxer and model before rejoining his family in the Tulsa area. In Tulsa, John got a job at St. John's where he served for 44 years until he retired. During his time there, he made many life-long friends and became well-known for his hard work and positive attitude. At 21, John got married and became the father of 4 beautiful children. John's work ethic extended far beyond the scope of his job. He gave up drinking and smoking to become a long-distance runnerthree incredibly hard accomplishments individually, but he achieved them all at once. The longest race he ever completed was a Mexican trail ultramarathon which was 62 miles long (100 km!) He competed in races up until 2011, but afterwards was still frequently seen by his granddaughters jogging on Riverside trail. On July 8, 2007, John accepted Jesus Christ into his heart. He served his church with the same fervor and passion that he put into running. His passions led him to help start both the Tulsa Marathon and Oklahoma's first Hispanic Celebrate Recovery. He loved everyone and was in turn loved by everyone who came across him. He will be remembered for his love of Harley Davidson motorcycles, his overflowing heart, and his infectious smile which his wife and family adored. John completed his longest race on March 7, 2018. John is preceded in death by his parents; son, Kennett; brothers, Rosendo, Martin, Aurelio, Marselo, Fernando, and Emilio Jr.; sisters, Consuelo and Inocencia. He is survived by his wife, Nannette Castillo of Tulsa; sister, Lisa Castillo of Tulsa; sons, John of Kellyville, and Jimmy of Bixby; daughter, Cynthia of Kellyville; and many grandchildren and great-grandchildren. Services for John will be held Tuesday, March 13, 2018 at 11 a.m. at Southern Hills Baptist Church in Tulsa.

To order memorial trees or send flowers to the family in memory of John Castillo, please visit our flower store.