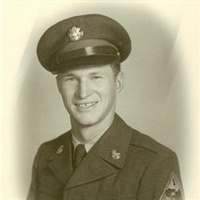 John Delvin Horton was born March 19, 1930 in Fairview, Oklahoma to Luther Baum Horton and Barbara Ann Henson- Horton.
John is preceded in death by his wife of 46 years Martha Baker-Horton and his sister Mary Horton-Goza of Owasso.
He is survived by sisters: Donna Jean Horton- Shoun and her husband Bill of Tulsa, Oklahoma; Annette Horton- Boston and her husband Keith of Kansas, OK; his children:
JoAn Snovel- Helms and husband Tom of Frisco, TX; Larry Snovel and wife Margie of Chandler, OK; John Snovel and wife Cheryl of Catoosa, OK; Bill Snovel and wife Jeanette of Chandler, OK; Gaylene Horton- Helms- Wright and husband Greg of Anchorage, AK;
Philip Horton and spouse Steven Olson of Dallas, TX. As well as 12 grandchildren, 26 great- grandchildren and 2 great- great-grandchildren.
His life started out as a cattle and dairy farmer, until his military career began in Ft. Hood where he was trained as a heavy equipment mechanic and served in the Korean War and was stationed in Chitose Japan for 3 years. He used this training to further his career with Albert and Harlow in Tulsa for approximately 26 years. He and Martha moved to Chandler to take a job with his oldest son as the Shop Foreman until finally retiring.
John was a singer on the radio and has many fan letters in a group called the Owasso Okies where he was lead singer. He also performed in the Tulsa Men's choir.
He loved to work with wood in both artistic ways as well as construction, he could fix about anything, taught his boys to take apart a car engine and put it back together, and was always available to help anyone who needed it.
Dad married at 29 to his wife Martha with 5 children and became the happiest "Instant Father" completing his family of 6 the next year. He was loved by all who met him.
Family will meet Thursday for lunch at 12:00pm at The Wild Potato Buffet at the Hard Rock Casino. You will be responsible for your own bill. Buffet is located on the first floor by the hotel check-in and is kid friendly.

To order memorial trees or send flowers to the family in memory of John Horton, please visit our flower store.