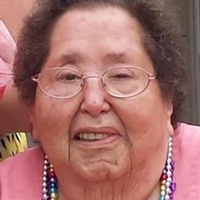 Lena Fay Henson was born August 4, 1936 to Emma Jane and Charley Sam Henson Jr. Fay had a twin brother, Elic Ray Henson. Ray Died July 27, 1945 of Typhoid Fever. She was from a large family and had one sister, Peggy, and 5, brothers; Walker Lonnie, James Willis, Elic Ray, Richard Ellis and C. L. All the family has passed on except for C. L. who lives in Fort Mohave, Arizona. She has two nephews, Carl, who lives with his family in Broker Arrow and Chuck, who lives in Tulsa.
Fay attended school primarily in Catoosa and was graduated from high school in Wagoner, Oklahoma. She was a devout Christian having accepted the Lord at an early age at the Assembly of God Church in Catoosa and most recently attended the Lynn Lane Baptist Church until failing health prevented her attending.
She had a winning way about her and always had a ready smile. She enjoyed singing, reading and talking with friends. She lost most of her hearing in the last few years but that did not stop her from telling stories about her life at the Rolling Hills Rest Center where she spent the last years of her life. She will be missed by all who knew her and we will miss her friendly smile.

To order memorial trees or send flowers to the family in memory of Lena Henson, please visit our flower store.