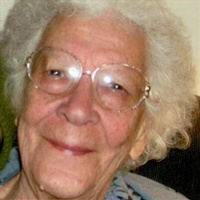 Rosetta Leona Foreman Newbold
Born June 30, 1917 in Lowery, OK and went home to be with the Lord January 19, 2018 in Tulsa, OK. Growing up in Tahlequah she was known as Rosetta. At 6 years old she had typhoid fever and after an intense battle lasting weeks the doctor said she would last 3 or 4 more days. That was 94 years ago! She gives the glory to the Lord for sending a Cherokee woman to her door. Feeding her a wild root tea, this woman ministered to her and she began to recover. Rosetta always said she was a "miracle child'. In the 1940's as an adult living in California, Rosetta worked at an airplane parts plant checking blueprints. While in California, she met and married her beloved husband, Dwane Newbold. Their adventures lasted 40 years. Through the years they traveled around this country and said that there were only 10 states she didn't get to visit. At some point Rosetta became Leona to friends and family: she eventually became Mom, Grandma and finally Great Grandma. In the last couple of years she has been announcing herself as: "I'm a Cherokee woman from Tahlequah, OK and my name is Rosetta Leona Foreman Newbold!" Leona's later years were spent in Tulsa, OK. She has been widowed for the last 30 years. Leona was preceded in death by husband Dwane, nephew: Lawrence Forman, parents: John W. and Fannie Hartness Foreman, sisters: Alice, Cherokee and Joan, brothers: John D. and Dwight. She is survived by, daughter: Genevra Storjohann and the joy of her old age, grandson: Brandon and wife Justina, great granddaughters: Arya and Laurel, brother: Bill, as well as numerous nieces, nephews and extended family. Leona treasured her spiritual family-the friends and relatives brought together by fellowship and worship for the Lord. Whatever path she walked, Leona knew that the Lord provided and sustained her throughout her long life. Faith is how she lived to be 100! We know now that the welcome home and reunion with loved ones she is experiencing is all the sweeter as she has left her worn body behind.

To order memorial trees or send flowers to the family in memory of Leona Newbold, please visit our flower store.