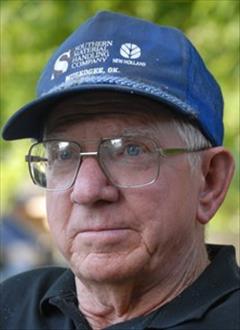 On Saturday, December 19, 2020, Loyd Gerhard, loving husband, father, grandfather and great grandfather, passed away at the age of 89.

Loyd was born on October 3, 1931 in Tulsa, OK to Pearl and Otie (Hedges) Gerhard. After a tour with the Navy, Loyd received training as a diesel mechanic from Okmulgee Technical College. On October 28, 1956, he married Lois Halbrooks. They raised one son, Terry, and one daughter, Debbie.

Loyd had a passion for his family, rose gardening and dirt track racing. If he wasn’t attending a family event, he could be found tending to his roses. But on Saturday nights, Loyd could be found at the races cheering on his favorite race car drivers. He passed on his love of racing to his son Terry. Loyd’s biggest passion was his children, grandchildren, and great-grandchildren. Over the years he sacrificed his personal time to make sure he was in attendance and supporting them at literally hundreds of sporting and school activities. He went out of his way to include his children and grandchildren in his love for racing. Loyd was a spiritual man with love for his wife and his church which was demonstrated by his commitment to his church and Sunday school. Loyd loved his wife Lois dearly. Seeing them walking and holding hands into their 80s served as an inspiration for younger couples. Loyd was a role model.

Loyd was preceded in death by his daughter Brenda, his father Pearl, his mother Otie, and his sisters, Mae, Deltha, Viola, Clara and Irene. He is survived by his wife Lois, his daughter Debbie and son-in-law Paul, his son Terry and daughter-in-law Sherrie, grandchildren Katie, Kahlen and Karlie, Brandon and his wife Erica, Sean and his partner Annie, and great grandchildren Mason, Cashton, Leland, Enzo and Sebastien.

A funeral service will be held on Monday, January 11, 2021 at Oak Grove Baptist Church in Catoosa at 1:00 PM followed by a graveside ceremony at the Morris Cemetery in Morris.

To order memorial trees or send flowers to the family in memory of Loyd Gerhard, please visit our flower store.