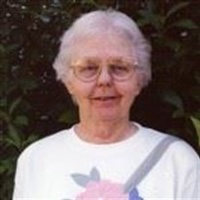 November 14, 2012 Martha Ann Holbert Carter passed away from complications of Alzheimer's Disease on November 13, 2012. Born February 27, 1927, she was the only daughter of Faye Elphia Mineo Holbert & Ellis Kesner Holbert. She was preceded in death by her parents and her husband, Dan. She said she was an only child, probably because her mother Faye, grew up with 5 sisters: Florence, Opal, Hazel, Thelma and Ada. Martha's paternal grandmother Persis Holbert lived with Martha and her parents in Tulsa and was a major influence in her life. She attended and graduated from Central High School (Tulsa Public Schools) and then the University of Tulsa where she met Rolland Dan Carter. At TU, Martha was a member of Chi Omega. The couple was married September 3, 1948. Martha was very artistic and creative. She loved needlecraft of all kinds and hand-crafted many items for her children and grandchildren. She also painted china and created holiday decorations. Martha was also an expert at completing crosswords, cryptoquotes and solving other difficult pencil games. Martha and Dan were married in Tulsa's First Presbyterian Church and were instrumental in starting the Kirk of the Hills Presbyterian congregation. Martha was a member of John Knox Presbyterian church at the time of her death. She was also a longtime member of the Republican party and served as one of the Page Belcher "Pages"
during his campaigns. Martha and Dan were both lifelong Tulsans but for a while after retiring, lived at Grand Lake. There, they continued to enrich their family with many memories of holidays at Grandma and Grandpas -- boating, fireworks, fishing, bird and wildlife viewing and always the best home-cooked meals. Martha and Dan had four children. She is survived daughter Ann Corcoran and three sons: Dan K. Carter, David Carter and John W. Carter all of the Tulsa area. She is survived by 10 grandchildren: Nick Corcoran, Adam Corcoran and Kyle Corcoran; Crystal Carter McElvany; Christopher Carter, Sheila McGinnis and Joel Carter; Emily Carter, Chase Carter and Daniel James Carter. She is also survived by two great grandchildren, Evan McElvany and Ella McElvany. A memorial service for Martha Carter will be Friday, November 16 at 2 p.m. at John Knox Presbyterian Church, Tulsa, OK. Dr. Jeffery London, Officiating. In lieu of flowers, donations may be made to any Alzheimer's association.

To order memorial trees or send flowers to the family in memory of Martha Carter, please visit our flower store.