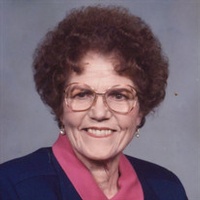 Myra Marie Dover entered this life on February 5, 1920, the youngest of twelve children born to A.F. "Bud" Dover and Edna Luckey Dover at their farm near Eufaula, Oklahoma. The Lord called her home on March 2, 2018, in Claremore Nursing Home.
Myra graduated from Hanna High School and then attended Northeastern State College in Tahlequah, nearly completing a bachelor's degree.
She had a varied work life. Besides being a homemaker, she taught elementary school for four years in Oklahoma and California, worked in a canning factory in California, and finally worked part-time for 35 years at Harvard Cleaners in east Tulsa.
On April 25, 1942, she married Wilber Melvin Wilks. His career as a teacher and a principal led them to various towns and cities in Oklahoma and California. During their life together, God blessed them with three children. In 1965, they returned to Oklahoma, residing at 3 South 205th East Avenue in Tulsa. After Mel's death in 1994, Myra continued to live there independently until September of 2014, when ill health forced her to move in with her son and her daughter-in law and then into Claremore Nursing Home.
In 1943 Myra was saved at Calvary Baptist Church in Muskogee, Oklahoma. In 1965, she and Mel joined First Baptist Church, Catoosa, where she not only taught but also sang in the choir and served on various committees. Throughout her Christian walk, she was active in church life, teaching adult women in Sunday School for 50 years. Her church family was especially blessed by her "food ministry," particularly her deviled eggs and her famous coconut pie. In 2014, she began attending First Baptist Church, Inola, where she was a member of the Anna class.
Besides baking, Myra greatly enjoyed flower and vegetable gardening and tending her lawn. And she and Mel were fans of blue grass music, attending numerous festivals, in and out of state. But among her greatest passions were studying God's Word every day, preparing her Sunday School lessons, and praying. Growing up in a large family, Myra was a "people" person and always enjoyed social gatherings, both family get-togethers and church functions.
Myra is survived by her son and daughter-in-law, Larry and Rita Wilks of Inola; daughter Kimberly Lynn Wilks of Port Richey, Florida; grandchildren Jeannie Shaw, Gary Dale Wilks, and Stacey Dunham; great-grandchildren; and a host of nephews, nieces, and friends. She was preceded in death by her husband, Mel, and son, Gary.

To order memorial trees or send flowers to the family in memory of Myra Wilks, please visit our flower store.