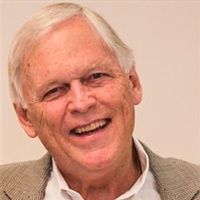 Paul Thomas "Tom" Mann was born August 15, 1947 in Dallas, TX, the only son of Irene and John Mann. He married his soulmate and high school sweetheart, Linda Dysert Mann, on December 29, 1967. He was a devoted father to his three children, Ashleigh Mann Boedeker, Allison Mann Jamison, and Paul Thomas "Tommy" Mann II. His family was his heart, and he delighted in his seven grandchildren: Griffin, Greer, and Charlotte Boedeker, Jude and Aven Jamison, and Patrick and Lily Mann to whom he was lovingly known as "Papa." He accepted and treated his children's spouses, Dr. Daniel Boedeker, Eric Jamison, and Jennifer Scannell, as his own.
Tom graduated from Southern Methodist University with a degree in English, and earned his JD from SMU. He was an editor of the Southwestern Law Journal, an honor reserved for top students. He began practicing law in Dallas in 1972, and was the first associate and one of the original four attorneys who founded the firm now known as Winstead. After moving to Tulsa in 1980, Tom continued legal work and spent decades working in real estate development.
He was a lover of music, literature, golf, the Dallas Cowboys, and above all else, his family. A man of few words, he laid out the path of a devoted husband, father, and Papa by the way he lived every day. Linda was the center of his life, and beginning at age 16, they embraced all of life's joys and challenges together. He supported Linda through her recent fight with ovarian cancer, and steadfastly stood by her through surgery and chemotherapy. Despite facing numerous health challenges, Tom was never one to ask "Why me?" Rather, he focused on the positives in every situation, and was an inspiration to everyone who knew him. He was known to all as an unfailingly ethical and honest man on whom you could always count. He extended kindness and generosity to everyone he met. A surrogate father to the friends of his children, Tom was loved by many and will be missed by them all.
At 28 years of age, Tom suffered his first heart attack, a result of a genetic condition called familial hypercholesterolemia (FH), which was only part of a lifelong battle against high cholesterol and heart disease. He made the decision to leave corporate law and move to Tulsa in 1980 to spend more time with his wife and children. Over the years Tom coached innumerable sports teams for his children, spent thousands of hours on sidelines and in audiences cheering on his family. An avid golfer, Tom had seven holes-in-one in his lifetime, and delighted in telling tales of being mistaken for Jack Nicklaus on the course.
In 1996, at the age of 49, after years of chronic heart disease Tom and his family received the generous gift of life in the form of a heart transplant. This selfless gift allowed Tom the blessings to see all three of his children marry and to become Papa. We are forever grateful to that anonymous family for giving our family the gift of another 20 wonderful years together.
Preceded in death by his parents and his mother-in-law Gene Dysert, he is survived by his wife; children and their spouses; grandchildren; father-in-law Peter Dysert, Sr.; in-laws Teresa and Rusty Fields and Linda and Dr. Peter Dysert; nephew Chris Dailey and husband Marty; nephew Cameron Dailey and wife Sydnee; nephew Peter Dysert and wife Lauren; niece Katie Kirkwood and husband Kent; uncle Bill Mann and wife Chris; cousin Don Mann and wife Helen; cousin David Mann and wife Dana.
In lieu of flowers, the family requests donations be made in Tom's honor to The FH Foundation (www.thefhfoundation.org).

To order memorial trees or send flowers to the family in memory of Paul Mann, please visit our flower store.