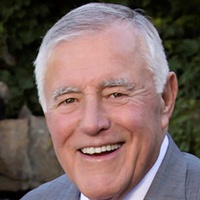 Robert F. "Bob" Biolchini, long-time Tulsa attorney, president and CEO of PennWell Corporation from 2000 until his retirement in 2015, and owner and Chairman of banks in Northeast Oklahoma and Wyoming, died November 8 in Jackson Hole, Wyoming. He was 78.
Bob was born in Detroit, Michigan on September 22, 1939. He graduated from the University of Notre Dame in 1962 and remained a fervent and generous supporter of the University throughout his life. After earning his law degree from George Washington University in 1965, Bob and his wife, Fran, spent two years in Germany where Bob was a U.S. Army Captain and executive officer of an armored battalion. Bob would often comment on the lessons learned in the military that proved useful to him in leading and managing a large corporation like PennWell, as well as his many entrepreneurial ventures in banking and insurance. Following two years of active duty as a NATO officer in Germany, Bob then started his legal career in Tulsa and later founded his own law firm, Stuart, Biolchini & Turner, in which he was active until his death. Bob was actively involved in the business of PennWell Corporation for nearly five decades. In 1970, the late P. C. Lauinger, Bob's father-in-law, asked him to join PennWell's executive committee and board of directors and to also serve as the company's general counsel. In the years that followed, Bob was the driving force behind PennWell's growth through acquisitions and international development. Since his retirement in September 2015, Bob remained active as chairman of the board of PennWell. Bob loved the media and trade show business, taking PennWell to all corners of the world with conferences and exhibitions serving highly-strategic global markets. Despite his affinity for expanding PennWell's international footprint, Bob was also intent on nurturing PennWell's roots in Tulsa, which began with the Oil & Gas Journal and founding of the company in 1910. Tulsa has remained the headquarters and employs over 335 even though the company also has offices in London, Houston, New England, New Jersey, and California with a total workforce of 535. Devoted to his family, faith, and the University of Notre Dame, Bob and his wife, Fran, endowed a law school professorship in 1995 and in 2008 underwrote the renovation of the law school building, which was renamed Biolchini Hall of Law. Since 2001 Bob served on the University of Notre Dame Board of Trustees and before that, he was a member of the University's Law School Advisory Council for 19 years. He also served as a Knight of The Sovereign Military Order of Malta and of the Holy Sepulchre and as chair of the Diocese of Tulsa's Fund for the Future.
Bob's business and civic interests were many and varied. Bob loved the challenge, risk and mental chess match that business provided him. Bob died as owner and Chairman of Valley National Bank and AmeriTrust in Tulsa, Oklahoma and Bank of Jackson Hole, in Jackson Wyoming. In addition, he was a member of Lloyds of London and the director of Old Faithful Underwriting Limited. He served on numerous boards of both private and public corporations in oil and gas and other industries.
Other than family and work, Bob loved traveling, politics, and the arts, with a special interest in Tulsa's Gilcrease Museum, for which he served as the museum's president and chairman of the board of directors. He also loved the outdoors and hunting, especially at the Big Lake Duck Club near Claremore, and spending time fishing and hunting in Jackson Hole.
Bob and his wife, Fran, celebrated their 50th wedding anniversary in Rome in June 2015 with Mass at St. Peter's Basilica in the Vatican along with family. "This landmark occasion," Bob said, "caused us to reflect on both the undeserving blessings we have received throughout our lives, and the life we hope to deserve in the future." He is survived by Fran, his beloved wife of 52 years; six children: Bob, Doug, Fran Fleming (Kevin), Toby, Tom (Jess), and Christi Yannelli (Alan); six grandchildren: Paul, Sophia, Max, Lucy, Rocco, and Augustine.
Bob was a man of extraordinary energy and formidable intellectual capacity. He relished life and was a figure larger than life. His friends, business associates, and employees around the globe mourn his passing and will remember his profound influence on their lives and careers.
Donations in Bob's name may be made to Fire Engineering Courage and Valor Foundation which is a foundation created by Bob and his son Toby that honors the 342 firefighters who lost their lives in the 9-11 attacks. Each year since 2002, the Foundation has presented the Ray Downey Courage and Valor medal and a cash award to the firefighter, living or posthumously, selected by an independent panel for having exhibited exemplary bravery in a rescue situation.
The rosary will be said at 7 p.m. on Friday, Nov. 24 in Cascia Hall's St. Rita Chapel and the funeral will be held at 10 a.m. Saturday, Nov. 25 at Christ the King Church in Tulsa. Funeral services are being handled by Kennedy Midtown Funeral and Cremation.

To order memorial trees or send flowers to the family in memory of Robert Biolchini, please visit our flower store.