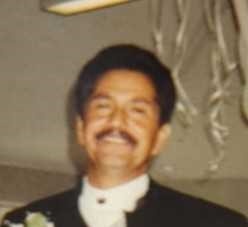 
On May 24th, 2021 Robert Joseph Perez or “Bobby” as most knew him left this world and was finally reunited with his much beloved wife Sabrina. (Who had preceded him in death in 2004). Also preceding him in death were: His mother Francis, his father Manuel, and his grandson Demetri . He is survived by his three kids, Tiffini, Casey, and Kevin; His grandkids and great grandkids, his sister Marie, his sister Irma, his brothers Tim and Joey. For all those who knew Bobby, he was a fighter, never giving up no matter what life threw at him. You would never know he only had one leg with the energy and determination with which he lived his life, doing things better than a person with two; and, it was always done in style, Bobby was sure proud of his head full of hair and always made sure it was styled to his preference and making sure he was looking good. Humor was another thing he always had, if you never heard a joke from Bobby, you didn’t know him. He was always full of jokes about everything. It’s no secret that Bobby liked to drink beer, watch football, and listen to Motown and all the oldies, his favorite ways to kickback and relax. (With of course, his all time favorite team being the Raiders.) More important to him than all these other things were his family. His love for his wife during her life and even after, his love for his kids, every single one of them. He was proud of all the things that they did; because it didn’t matter what it was just that they were living their lives the best they could. And he always just wanted one thing for them: for them to be happy and safe in whatever they did. He loved to spend time with his kids and grandkids and great grandkids, all the way to the end of his life he liked and hang out and participate in any crazy shenanigans they might be doing. Go karts, hot rods, motorcycles, bowling, dancing, and parties. He loved to be a part of it all. He was much loved, and he will be extremely missed by all.

To order memorial trees or send flowers to the family in memory of Robert Perez, please visit our flower store.