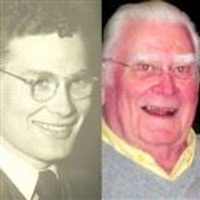 January 2, 2013 Roger Brucker Graham was born on January 4, 1926 in Omaha, Nebraska. He was the son of Olga and Captain William H. Graham, a war correspondent killed in action during World War II. Roger passed away peacefully at home on December 22 surrounded by those he loved and those who loved him. View Memorial Video Roger was a Navy Veteran, serving his Country during World War II in the Philippine Islands. Following the War, he attended Drake University in Des Moines on the GI Bill where he met and married Anita Maurine Rodgers, his loving wife of 63 years. After moving to Tulsa, they owned Graham and Company, specializing in independent claims and investigation with offices in OK, KS and CO. Roger retired in 1994 as Vice President in Charge of Claims after more than 30 years with Mid Continent Casualty Company. He is preceded in death by his parents, his sister Marilyn Fowler and his wife Anita Rodgers Graham. He is survived by his three sons and their wives: Candace and Vaughn Graham, Kirsten and Mark Graham, Eric Graham and Virginia Graham, six grandchildren, five great grandchildren and nieces and nephews. Roger was thankful for his caregivers Stacie, Betty, Jasmine, Tanara and Julie from Visiting Nurse Association and for his RN Faye from Hospice of Green Country. Each enabled Roger to remain safe and at home until his life journeys end. Roger's life will be celebrated in a military ceremony Friday, January 4, 2013 at 11:00AM at the Fort Gibson National Cemetery, Ft. Gibson, Oklahoma, where both Roger and Anita's ashes will be interred. In lieu of flowers, donations in his honor may be made to Hospice of Green Country or Visiting Nurse Association of Tulsa. Roger will be remembered by his great laugh, smiling face and big heart. With Anita, you may be out of our sight, but you will always be loved, as you have loved us. Video Tribute of Roger Graham http://youtu.be/vwDx4Xnrjbc

To order memorial trees or send flowers to the family in memory of Roger Graham, please visit our flower store.