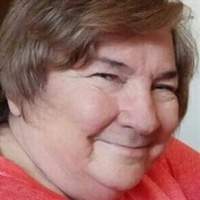 Suanne Linden Willis Sneed was born April 30th, 1947 in Tulsa, Ok, at St. Johns.
Preceded in death was her parents Walter & Anna Willis of Tulsa, Ok. Her only sibling a brother, Walter (Bing) Crosbie Willis.
Suanne grew up for her love of golf which was taught by her father. She had a lot of accomplishments such as woman's state runner up, Rolling Hills C.C. champion 5 times and Mohawk Golf club champion 5 times, District champion also. She traveled all over the U.S. going to Trans Nationals, U.S. Opens tournaments. She worked in the Steel Industry for 20 yrs, and the Port of Catoosa, Tomahawk Metals General Manager. She became ill in 2004 and struggled for several years enjoying her kids and grandchildren. Survived by her Husband Robert Carl, her daughter, Apryl Sneed, husband Jeff McCratic, her son, Austin Willis Sneed, and wife Chelsea. Grandchildren, Alex & McKayln Acree, Jeffrey &
Maximus McCratic, & soon to be born Sam Sneed.

To order memorial trees or send flowers to the family in memory of Suanne Sneed, please visit our flower store.