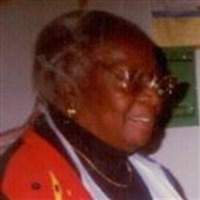 October 22, 2013 A Glimpse Into Her Life Thelma Louise Graham August 25, 1921 - October 12, 2013 Daughter of Georgia Ann Watson. Mother of Joan, Hubert, Charles, Christopher and Beverly Ann. Grandmother of Reginald Clarence, Shantoyia Mecoe, Ramon Akyl, Scott, Brian, Brandon, Lisa, and Jackie. Great-Grandmother of DaQuan, Sharlyn, Sharvae, Ramon Jr., Tasheena, and Scott Jr. Sister of Geraldine Scroggins. Thelma attended the Tulsa Public Schools and was active in rendering untiring services to her neighbors and community. She loved and excelled in cooking and gave many years of service as a cook to North Mabee Center. After a lengthy struggle with sickness, she left her earthly temple on October 12, 2013 to join her parents, all of her children, husband, Hubert Graham, and all of her brothers and sisters, excepting Geraldine. Memories of Thelma are left to be cherished by her grandchildren, great- grandchildren and sister, all above named; niece:
Bonnie Noble of Oakland, CA; daughter-in-law: Jannett Armstrong of Monrovia, CA;
brother-in-law: George Soils of Oak Park, IL and many other nieces, cousins, friends, and acquaintances. Kennedy Funeral and Cremation, Kennedycares.com

To order memorial trees or send flowers to the family in memory of Thelma Graham, please visit our flower store.