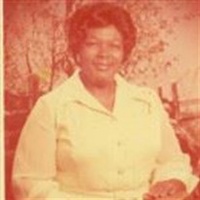 April 24, 2014 On January 29, 1929 a baby girl named Thelma was born to Ruth and Arthur Harris. She also had a stepfather, Dan Maxwell, whom all preceded her in death. Thelma attended Rosewall Elementary until the family moved to Oklahoma. She also attended Dubar, Carver and graduated from Booker T. Washington High in 1948. Thelma professed a hope in Christ at an early age. She grew up in Metropolitan Baptist Church. She met and married Eugene C Pearson in 1940. In this union they adopted Clarence Pearson who preceded her in death, Ray Pearson of Oklahoma City and Rhonda Pearson of Tulsa. They joined Liberty Baptist where she worked in many different departments, mission was her choice.
Thelma had three sisters she loved dearly, Claudine, Evelyn and Ruth as well as three brothers, John, Charles (Ola) Maxwell, all of whom preceded her in death. She leaves one brother Clyde Maxwell of San Diego, CA, a very special grandson Rondrey Pearson and a host of grandchildren, great grandchildren, nieces, nephews, cousins and friends that she raised live to cherish her memories forever. She was a wonderful woman, mother, sister and friend that will be missed dearly by many. Visitation: 12-7PM, Friday, April 25, Kennedy-Midtown Chapel
Services: 11:30AM, Saturday, April 26, Pilgrim Rest Baptist Church, Tulsa, OK Kennedy-
Midtown Funeral and Cremation
8 North Trenton Ave
Tulsa, OK
918.599.7799
kennedycares.com

To order memorial trees or send flowers to the family in memory of Thelma Pearson, please visit our flower store.